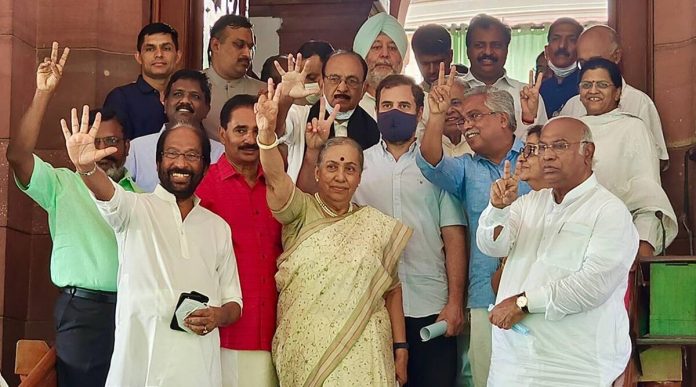 New Delhi [India]: Shortly after filing nomination papers for the Vice-Presidential elections to be held on August 6, Veteran Congress leader and Opposition candidate Margaret Alva hopes to ‘build a strong and united India’.

“It is a privilege and honour to be nominated as the candidate of the joint opposition for the post of Vice President of the Republic of India. I accept this nomination with great humility and thank the leaders of the Opposition for the faith they have reposed in me,” said Alva after filing her nomination papers.

She said, “I believe this nomination is an acknowledgement, by the united Opposition, of the over fifty years I have spent in public life, as a member of both Houses of Parliament, a Union Minister, a Governor, a proud representative of India at the United Nations and on other global platforms, and as a fearless champion of women’s rights and the rights of underprivileged and marginalised groups and communities across the length and breadth of our great nation.”

“Over these fifty years, I have worked for my country with integrity, courage and commitment, my only obligation: to serve without fear, the Constitution of India,” she said.
Alva said that she will fight for what is important to India– to uphold the pillars of democracy, to strengthen our institutions, and for an India that is ‘Saare Jahan se Accha’.

“The coming together of the Opposition to support my candidature for the post of Vice President of India, is a metaphor of the reality that is India. We come from various corners of this great country, speak different languages, and follow different religions and customs. Our unity, in our diversity, is our strength. We fight for what is important to us: to uphold the pillars of democracy, to strengthen our institutions, and for an India that is ‘Saare Jahan se Accha’, that belongs to each and every one of us. In India where there is respect for all – for the farmer in the field, the ASHA nurse in the village, the small town kirana store owner, the student in college, the office worker, the unemployed youth, the housewife, the worker in the factory, the journalist, the government officer, the jawan at the border, the entrepreneur and so many more,” she said.

Alva said that she had spent her life fulfilling her commitments, with integrity and courage and now hopes to find common solutions and help build a strong and united India.

She said, “I have spent my life fulfilling my commitments, with integrity and courage. Elections don’t frighten me – winning and losing is a part of life. However, it is my belief that the goodwill, trust, and affection of members across party lines in both houses of Parliament, that I’ve earned, will see me through, and continue to guide me as one who works to bring people together, to find common solutions and helps build a strong and united India. Jai Hind.”

Congress leader and Opposition candidate Margaret Alva today filed her nomination papers for the Vice-Presidential elections to be held on August 6.

She was accompanied by the Congress’s Rahul Gandhi, besides other opposition leaders, including NCP’s Sharad Pawar, CPM’s Sitaram Yechury and CPI’s D Raja.