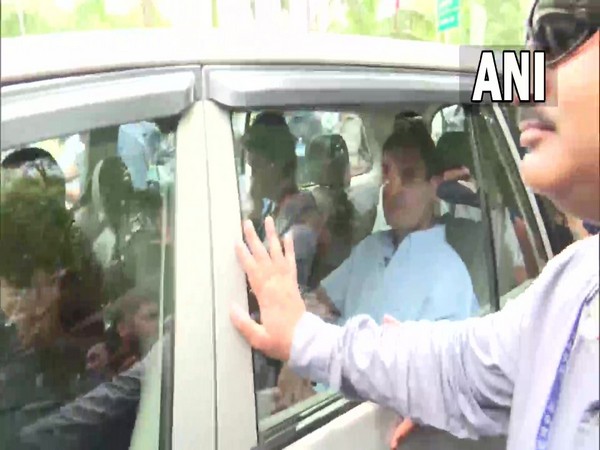 New Delhi [India]: Congress leader Rahul Gandhi on Tuesday reached the office of the Enforcement Directorate accompanied by his sister and party leader Priyanka Gandhi Vadra. He will be questioned by the officials for his alleged role in a money-laundering case linked to the National Herald newspaper.

Heavy police deployment was seen on the route from Gandhi’s home to the ED office.

This comes as Congress workers are observing a sit-in protest at the party headquarters on Akbar Road, Delhi after police refused to give them permission to hold a protest march in public.

According to a senior Delhi Police official, Congress had given an undertaking saying that the march and protest would be done at the party office, but on Monday, protesters took to the streets and reached the ED office. Section 144 is in force in the area and so the police detained the protesters to maintain law and order here.

Congress MP Manickam Tagore today alleged that he was detained by the Delhi Police on his way to the ED office. He wrote on his Twitter handle and said, “Today.. morning again we are detained … Hon’ble @loksabhaspeaker what’s happening in Delhi? Why home minister doing this? #RahulGandhi”.

Ahead of the second day of Congress MP Rahul Gandhi’s questioning by the Enforcement Directorate, the Congress again slammed the BJP-led Centre and accused it of using the probe agency as an “election management department” which it claimed has lodged over 5,000 cases to intimidate political adversaries.

Congress General Secretary Randeep Surjewala addressed a press conference today morning on the matter wherein he said, “ED probe against Rahul Gandhi is an attempt to muzzle his voice as he has always questioned Modi government on issues like China capturing our territory, inflation, fuel price hike, unemployment, religious vendetta…He is being constantly attacked.”

Congress leader Harish Rawat said the party’s protest will continue on Tuesday. “We will continue this fight tomorrow as well. The struggle of Congress party will continue until they (Central government) try to suppress the voice of Rahul Gandhi and our party,” he said on Monday.

The Congress’s “Satyagraha protest” – against what it claimed the alleged misuse of the probe agencies by the centre – began early on Monday. Sloganeering, demonstrations, posters, air balloons were seen at party headquarters and other parts of the national capital.

Mandsaur (Madhya Pradesh): 65 kilograms of opium worth Rs 6.5 crore being brought from the northeast in a truck were seized in Mandsaur, police said on Sunday. ...TAP TO READ MORE.
Read more
Sports

Mandsaur (Madhya Pradesh): 65 kilograms of opium worth Rs 6.5 crore being brought from the northeast in a truck were seized in Mandsaur, police said on Sunday. ...TAP TO READ MORE.
Read more

Bhubaneswar (Odisha): Primary school teachers from different parts of Odisha staged a protest in Bhubaneswar on Sunday with their three-point charter of demands for the state government. ...TAP TO READ MORE.
Read more
Load more

Jammu (Jammu and Kashmir): Kashmiri Pandit Migrant Employees held a barefoot march in Jammu demanding that the government should address their safety concerns while bringing out a comprehensive roadmap to relocate them in the Valley. ...TAP TO READ MORE.
Read more

Ranchi (Jharkhand): 'Operation Octopus' is still continuing to dig out explosives and hidden arms and ammunition from the densely forested hilly range of the Naxal bastion of 'Burha Pahar' -- a mountain range spread over 55 square kms touching three districts of Jharkhand and Chhattisgarh -- which was captured by security forces in September this year. ...TAP TO READ MORE.
Read more