Home Sports Milan Derby: Inter draws level with 0-0 with Milan in the...
Sports

Milan Derby: Inter draws level with 0-0 with Milan in the first leg of Italian cup Semifinal 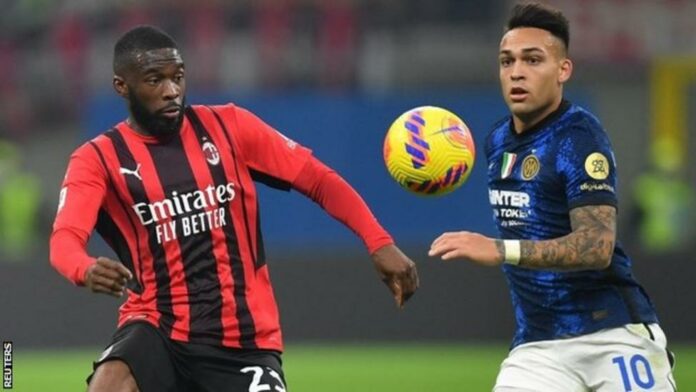 Inter Milan’s poor form continued on Tuesday when the first leg of their Italian Cup semifinal against city rival AC Milan ended in a 0-0 draw.

Since the beginning of February, Inter has only won one of its last seven matches in all competitions.
The defending Serie A champion has dropped out of first place in the league, losing 2-0 at home to Liverpool in the opening leg of their Champions League tie.

It was also Inter’s fourth consecutive game without a goal.
The Nerazzurri have now gone more than 400 minutes without scoring a goal.

At San Siro, both teams had chances, and while neither goalkeeper was well tested, Inter’s Samir Handanovic did have to make a one-handed stop to keep out a Rafael Leo curler early in the second half.

Inter hasn’t advanced past the semifinals since winning the last of its seven trophies in 2011, while Milan hasn’t won the cup in over two decades – since 2003.

Milan and Inter tied 1-1 in their first Serie A match of the season in November, while Olivier Giroud scored twice in Milan’s 2-1 league victory against Inter three weeks ago.

On April 20, the second-leg match will take place.
The final will be held on May 11th.