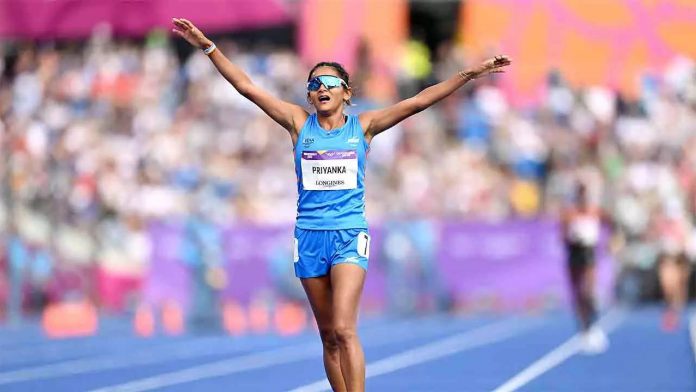 Birmingham [UK]: Indian athlete Priyanka Goswami clinched a silver medal for the country after finishing at second position in the final of the women’s 10,000 m race walk at the ongoing Commonwealth Games 2022 in Birmingham on Saturday.

Priyanka clocked the timings of 43:38.00, her personal best. She was always in contention of a medal as she was in the first position initially.

As Priyanka progressed, she lost her lead but by the finish, she was still good enough to come at second position.

At the top with the gold medal is Australia’s Jemima Montag, who clocked 42:34.30. It is not only her personal best but a new CWG record as well.

She was in the third position initially. But by the time she crossed 5,000 m, she gained a lead and never looked back.

Emily Wamusyi Ngii of Kenya secured the bronze medal. She clocked the timings of 43:50.86, a personal best for her.

Another Indian participant Bhawna Jat finished at eighth position with timings of 47:14.13, her best.

There is some exciting athletics action in store for fans today.

From 4:20 PM onwards, Avinash Sable will be participating in the men’s 3000 m steeplechase final.

From 4:45 PM onwards, women’s 4×100 Relay Heat 1 will take place in which prominent sprinters Hima Das, Dutee Chand and Sarbani Nanda will be participating.